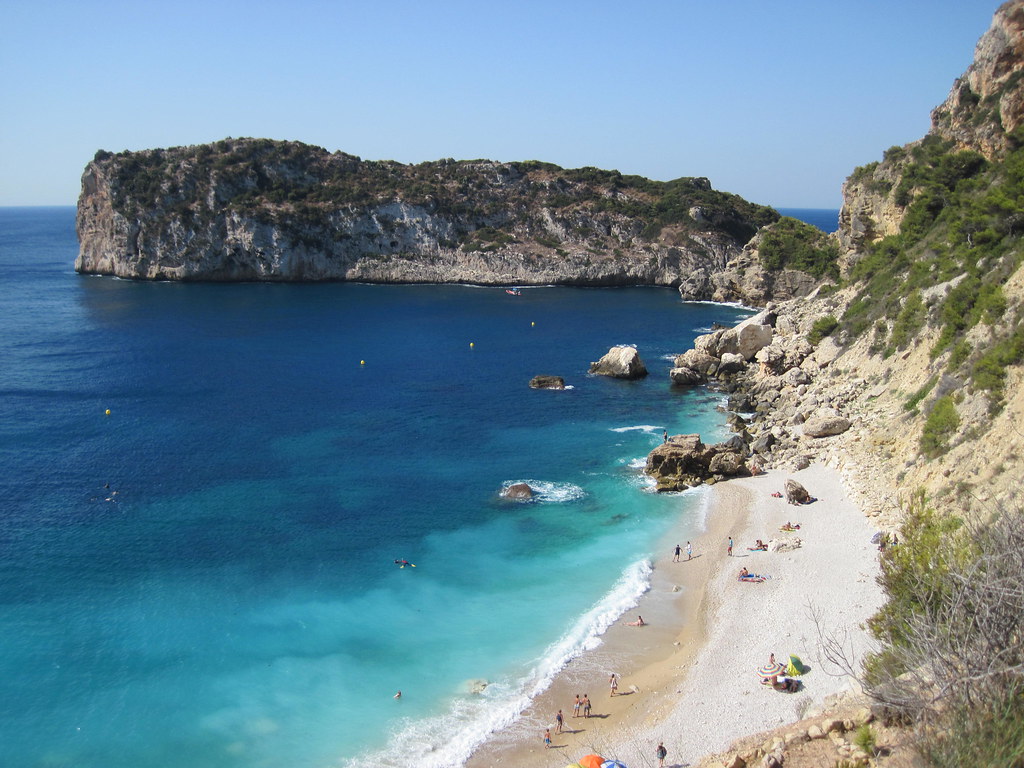 Are you looking for the best beaches in Javea? The popular European holiday destination, Javea is famous for it’s rich culture and stunning natural scenery; its beaches attract tourists looking for spend time relaxing in the sunshine on summer holidays. With so many beaches and a vast array of landscapes, Javea’s coastline is as diverse as it is beautiful.

Here you will find everything you need to know about the beaches of Javea, whether you want a beautiful sandy beach or a quiet bay where you can swim and sunbathe in peace.

The blue flag is an international badge that is based on the quality of bathing waters, information and environmental education, environmental management and safety and services and facilities and an environmental quality certification system that is awarded annually.

The beaches of Arenal, La Grava and La granadella de Xàbia have achieved the blue flag award. A distinction awarded annually by the European Foundation for Environmental Education to beaches and ports that meet a series of environmental conditions and facilities. The blue flag will fly again, during 2021, in the three beaches that already had this quality mark.

Javea has many different beautiful beaches to offer, outstanding among them is Granadella beach and the beautiful Cala Adella with a crystal clear water.

Apart from being beautiful, the beaches are also clean and safe in Javea, home to the highest number of beaches globally to have been awarded the coveted Blue Flag status for their outstanding environmental and quality standards.

With so many strips of sand to choose from, you may feel spoiled for choice, so we have rounded up the most essential Javea beaches for your bucket list.

La Cala Granadella or Granadella Beach is a stunning, naturally formed cove, considered by many to be one of the most enchanting settings in Spain let alone Javea! Granadella boasts 150+ meters of pebbled beach abreast the crystal clear waters of the Med. A sight to behold!

There are multiple local tour companies that offer guided kayak and paddle board experiences of the surrounding caves and beaches, using Granadella as the starting point ( SiestaAdvisor and Kayak Javea to name a couple! ). From personal experience, these are an amazing way to explore the parts of Javea you would never normally get a chance to see. There is also a hiking trail starting from the parking, that leads all the way up to ‘El Castell de la Granadella or The Castle of Granadella’, the remains of an old historic coastal defence post. We think it’s definitely worth a visit! Read more about Granadella beach

‘La Playa del Arenal’ is a 450m+, golden, sandy beach, known to many as the crowning jewel of Javea. Bestowed with a ‘Blue Flag’ symbolising the environmental quality certificate given by ‘FEE’ guaranteeing optimal water conditions and being the only sandy beach in the area, the Arenal becomes a tourist hotspot in the summer months, acting as the central hub of the municipality. With a vast array of bars, restaurants and clubs, the Arenal supplies everything you could possibly need for the perfect beach day and beyond!

Playa del Arenal is awarded annually with the blue flag, which symbolizes the environmental quality certificate developed by FEE since 1987 and which guarantees the optimal conditions of its waters. Read more about Javea Arenal Beach

Cala Portitxol or Portitxol beach, also known as Cala de la Barraca or Barraca Beach, is a beautiful pebble beach, stretching approximately 900 meters with spectacular views of the Mediterranean Sea and the Isla del Portitxol. The cove is bordered either side by the cliffs of Cap Negre and Cap Prim, only adding to the picturesque landscape.

Similar to the other beaches in the area, there are tour companies that offer kayak, paddleboard and scuba excursions from the beach, allowing you to further explore the neighbouring coves and the Isla del Potitxol. The Isla del Portitxol is a small island roughly 80,000+m², situated a few hundred meters off of the shore. The island is rich in flora, fauna and historical significance, due to the discovery of important archaeological remains from Roman times. Read more about Cala Portitxol Beach

Cala Blanca, also known as ‘La Caleta’ is a collection of neighbouring, rocky beaches, which can be found at the far end of the ‘Playa del Segon Muntanyar’. The size of the beach is undetermined due to the fact that it wraps around the high cliff walls, revealing multiple private inlets, perfect for a quiet day in the sun!

Unlike many of the other beaches in Javea, Cala Blanca doesn’t offer kayaking or paddle board tours from the beach itself, presumably due to the rocky nature of the sea floor. This does however make it a popular spot for local fisherman, who often try their luck amongst the large schools of fish. Always worth a watch to inspect the day’s catch! As a consequence of the rocky terrain, Cala Blanca isn’t best suited to beach sports such as volleyball or football, but perhaps is more appropriate for sun bathing and general relaxation! Cala Blanca is the perfect beach for diving and snorkeling. Read more about Cala Blanca Beach

La Cala Ambolo is yet another beautiful example of what the Spanish coastline has to offer, except this pebble beach has a twist! Currently closed due to fear of detachment, Cala Ambolo is the only nudist beach in Javea. Stretching out approximately 300m and covered from all sides by large cliff faces, Cala Ambolo is the perfect beach to lay back, relax and let it all hang out!

This beach is exactly that… a beach! There are no rental services available for watersports, such as kayaking and paddle board rental. Furthermore, there is no umbrella or sun bed rental available either. Perhaps this is due to the beach’s more ‘natural’ approach to relaxation! There is a viewpoint located above the beach, called ‘Mirador Ambolo’, with spectacular, panoramic views of the coastline and ocean. You will not regret the short drive from the beach to get there, I assure you! Read more about La Cala Ambolo beach

La Cala Sardinera beach or Sardine Bay, is a 200m long, beautifully picturesque bay, situated on the north face of ‘Cap Prim’. The bay’s name originates from the large number of sardines that would gather and be caught by fishermen in these waters, in years gone by. There are many buoys off the shoreline of the beach, meaning in summer it can very quickly become one of the most popular destinations for tourists and locals to drop their anchors and settle in for the day!

Cala Sardinera is normally one of the more quiet beaches in Javea, making it ideal for a day of pure relaxation. Lay down your towel, sit back and take in the magnificent views of ‘Mt. Montgo’ and ‘Cap de Sant Antoni’, the most iconic landmarks of Javea. If lounging under the blazing Spanish sun isn’t for you, then perhaps a walk up and along ‘Cap de Sant Marti’ may be more to your liking. Once at the top, it boasts striking views of the Javean coastline and beyond! Read more about La Cala Sardinera beach

Cala del Tango or Tango beach is a rocky cove located at the far end of the Javea port, at the base of Cape San Antonio. The pebble beach originally stretched across 50m, however due to a change in land formation, barely any of the old beach remains. Furthermore, the cove is currently closed to the public due to the potential of rock slides from the cliffs above.

There are no beach amenities located at Tango, so if you were to visit the cove, it wouldn’t be to play beach volleyball! In truth, Tango is now no more than the bones of the beach that it once was. However, Cala Tango does still have one trick up its sleeve, as it is also known for its rock jumping! Slightly further down from the remnants of the old cove are a selection of plateaus on the cliff face, all at varying heights. This makes it perfect for any would-be thrill-seekers to test their resolve and take the plunge into the crystal clear waters below!  Read more about Cala del Tango

‘Cala del Ministre’ or The Ministers Creek is the rock formation, located at the far end of the Arenal, behind the hotel ‘Parador’. ‘Cala del Ministre’ earnt it name between 1957 and 1965, when the land and the chalet that was built upon it, were gifted by Francisco Franco to his Minister of Finance at the time Mariano Navarro Rubio, and thus the name ‘The Ministers Creek’!

This however is not the only piece of historical significance with the land, as hundreds of years prior it was used by the Romans as a fish salting farm, considered at the time to be an incredibly important process. Fermenting the salted fish entrails within the rocky deposits, producing ‘Garum’, a fermented fish sauce eaten by the Romans and distributed throughout their Empire! Read more about Cala del Ministre

La Segon Muntanyar beach, also known as ‘the Beach of the Second Mountain’ is a rough stone beach stretching over 1.5km. Due to the vast size of the beach, you’re almost guaranteed to find a satisfactory spot, even in the heights of summer. It is located southeast of the Arenal Beach and is ideal for a long day of sun bathing and relaxation.

Due to the rough and rocky nature of the beach, practising your beach volleyball is pretty much out of the question! However, as the waters here are normally very calm, making it perfect for snorkelling and observing the wildlife that lives amongst the rocks. There is also a ‘view point’ located on the beach named ‘Sequia de la Noria’, which features a sizably deep canal, presumably constructed to allow the transportation of sea water to certain points amongst the salt flats. Read more about La Segon Muntanyar beach

‘La Playa Primer Muntanyar’, also known as ‘the Beach of the First Mountain’ is a rough stone beach, stretching just under 2km. This beach offers some of the most mesmerizing, expansive views in the whole of Javea, especially for sunrise! Traditionally, the beach’s nickname is ‘The Dawn of Spain’. Although the ‘La Playa Primer Muntanyar’ is not actually the most Northern point of the country, nor the first to be lit by the light of the sun, it still keeps this nickname, due to the astounding view every morning!

Due to the usually calm waters located along the beach’s edge, it makes it a popular spot for surfers, paddleboarders and others to practice their watersports. There are multiple local companies, from which you are able to rent the necessary equipment to join in and ride the waves! If watersports isn’t your thing, never fear, sunbed and umbrella rental is here! Read more about La Playa Primer Muntanyar

‘La Platja de la Grava’ or ‘The Gravel Beach’, is a 300m long, mostly pebble and gravel beach, located at the forefront of the Javea Port. ‘La Grava Beach’ is popular amongst locals for an early morning swim and general relaxation, presumably due to its close proximity to all the necessary amenities required to make for a perfect day at the beach!

What isn’t there to do… La Grava Beach has it all! Sunbed and umbrella rental is available at this beach, as well as the opportunity to rent watersports equipment such as kayaks and paddleboards to make the most of your time on the water. There is also a scuba centre located no more than 30m from the end of the beach, that offers guided excursions of the best scuba spots in the area. Read more about La Platja de la Grava

Map of beaches in Javea

Direct link to map of beaches in Javea