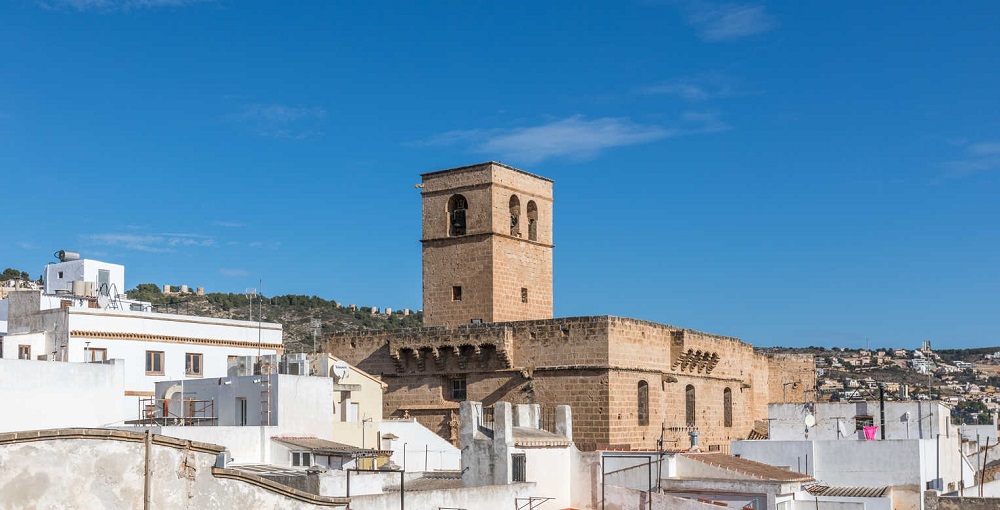 La Iglesia Fortaleza de San Bartolomé de Xàbia or The San Bartolomé Fortress Church is located at the center of the Javea old town. It has been classified a National Historic-Artistic Monument since 1931 and an Asset of Cultural Interest since 2018. Much of the church has been constructed using the typical rough stone seen in a large portion of the old structures in Javea, extracted from ‘La Cova Tallada’, from underneath Cap San Antonio. Historically, the church did not only serve as a house of worship, but also as a defensive fortress!

The oldest section of the church dates back to 1304! In 1513, Domingo Urtiaga, a famous architect of the times, began work on expanding the Church. The reasons for this were due the increase in population in the area as well as to fortify the building from would-be attackers, in this case the ‘Berber Pirates’. It was due to this that the church added ‘Fortaleza’ or fortress to its name! The watch tower of San Bartolomé, standing 30m high, also doubled as the bell tower for the church. Over the years housing up to 6 manually operated bells, all with different names that were later replaced in 1963 for their automatically mechanised counterparts, presumably to save a member of the clergy a job! This architectural treasure is a must see when visiting the Javea Old Town!

In the many years that San Bartolomé has stood, there have been a number of noteworthy occurrences related to the structure.

San Bartolomé Church can be visited between 10:30 to 12:30 and in the afternoons Monday to Friday. On Saturdays, Sundays and Holidays, the Church will be open for visitors 30 minutes before Mass. For more information and details on the specific times for Mass please see the bottom of the page.

How to get there to San Bartolomé Church?

San Bartolomé Church is located just under 4km NorthWest of the Arenal Beach. To get there from the Blanca Cars office one must…

Follow ‘Avinguda del Trenc d’Alba’ to the next roundabout, where you will take the 1st exit and follow the road as it turns right after just over 100m, becoming ‘Ronda Sud’. The road will bear left becoming ‘C. Trinquete’ and then left once again becoming ‘Calle Rda. Nte’. You should then take your 1st left followed by your second right, at which point any parking space available should do the job as you have arrived!

Strolling through the streets of the charming old town of Jávea will transport you, back in time, to the Middle Ages. A walk along its defensive walls to meet its main historic buildings will not disappoint you. In the old town you will experience a beautiful place with a rich heritage. After the Arab rule in 1244, Jávea was handed to the Crown of Aragon, but it was not until the early fourteenth century when it began to repopulate the zone needed to strengthen the territory due to continued conflict. In 1397 it obtained the Villa title belonging to the Marquess of Denia.

One of the significant historical moments that marked the city of Jávea was the constant attacks by pirates and corsairs to coastal population in the sixteenth century. This fact caused people to vacate their homes on the coast and went 2 km inland, and in a raised position facilitating its defense, where they built walls to protect themselves that would last until 1877. View properties for sale in Javea old town