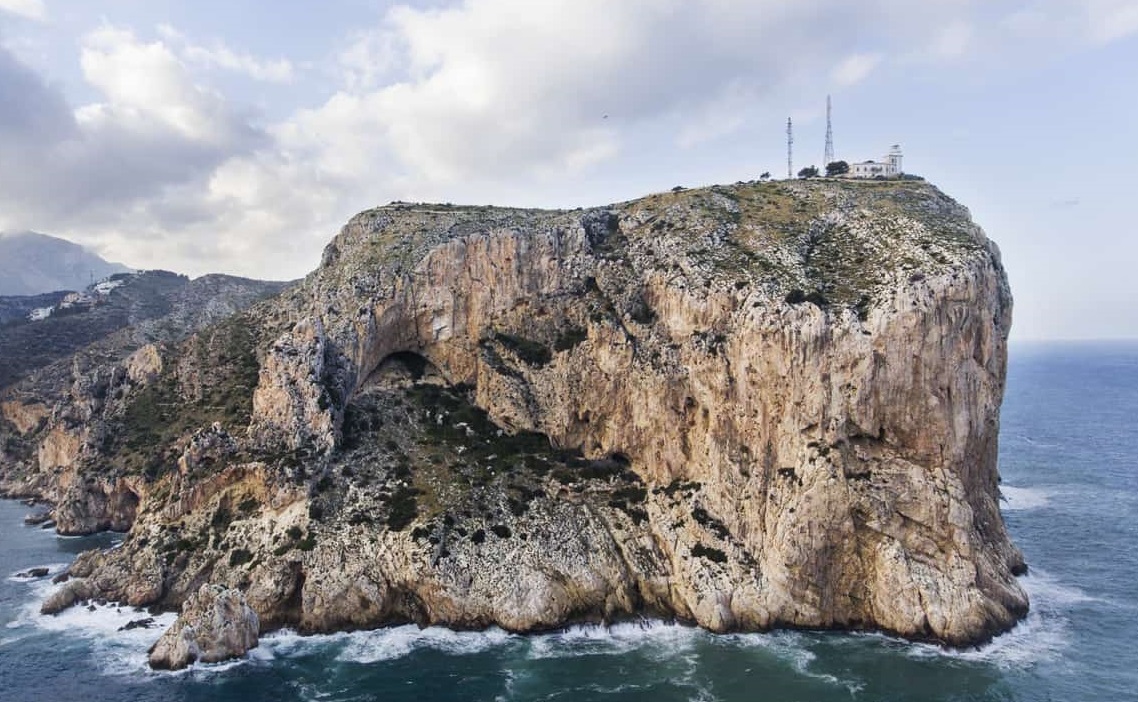 Cabo San Antonio covers an area of approximately 110 hectares of land and stands over 150m above sea level. Featuring its own lighthouse and whale watching lookout point, it’s a fantastic day out for the family.

Back in 2014 however, a vast area of the Cape was ravaged by fires, destroying much of its native wildlife. Operations are currently underway in order to restore the Cape to its former beauty, but don’t be fooled as Cape San Antonio is still most definitely worth the visit!

The Cape is part of the Montgó natural park and contains 2 flora micro-reserves and also at the base of the Cape, the Cabo San Antonio Marine Reserve. The micro-reserves are plots of up to 20 hectares, utilized to help with the conservation of rare, native, threatened flora. One of which is located on one of the North cliffs of the Cape and the other on the ‘L’illot de la Mona’ at the base of the Cape. The Marine Reserve is located between the Cape and the rocky coves of Les Rotes. Here you may find sandstone rodophytes, colonies of corals, sea lobsters, morays and a multitude of other threatened and rare species of wildlife.

It is possible to explore such things with guided scuba tours, also taking you to explore ‘La Cova Tallada’! La Cova Tallada is a partially man-made cave system, roughly 75m wide with an average height of around 15m, although at some points reaching up to 40m! Originally created due to the extraction of desirable, rough stone, used in the construction of various local buildings, including the Church of San Bartolomé or ‘Inglesia de San Bartolomé’.
All of the reserves are now protected by the Generalitat Valenciana.

How to get to Cabo San Antonio?

The best parking area for Cabo San Antonio is located just over 9km NorthWest of the Arenal Beach. To get there from the Blanca Cars office one must…

The road will bear left becoming ‘C. Trinquete’ and then left once again becoming ‘Calle Rda. Nte’, where you should then take the following right joining ‘Carrer de la Mare de Déu dels Ángels’. Continue until you reach the roundabout taking the 1st exit to join ‘Ctra de Denia’ or the ‘CV-736’. After just under 2km, the road will fork into 2. You should take the right hand road. Continue on the road for just under 3.5km and you will have arrived at your destination!

Urbanisation La Corona in Javea has a good infrastructure, a social club, sports facilities and a playground for children. Located just 2/3 km from the port of Javea. La Corona area is famous for its impressive luxury villas and the houses built are exceptional, many with architectural projects with style from villas with marked Mediterranean style to modern villas with large windows that allow panoramic views of the Mediterranean Sea and the entire bay of Jávea, Costa Blanca.

Urbanisation La Corona in Javea has still some plots for sale to build, taking into account that they are sloping land, since they are located on the mountain and most of them need to make important clearings in order to get the most out of the views. It is practically impossible to find flat plots, although there are some but at exorbitant prices that not everyone is willing to pay.

It is very close to the Port area – Duanes de la mar de Javea. It has a good infrastructure and facilities. Most villas are luxurious with wonderful views of the bay of Jávea and Cabo la Nao. Normally prices are around a million euros upwards, it is also true that some can be found below that price but either because it needs to be reformed or because they do not have any type of views. View properties for sale in La Corona in Javea