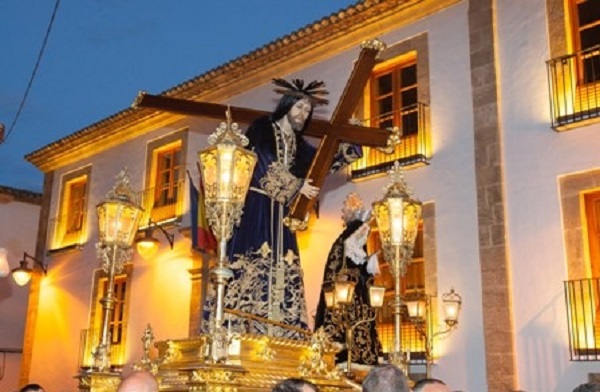 The fiestas of Jesus Nazareno in Javea are so popular that many mistakenly believe he is Javea’s patron saint.

But Jesus Nazareno arrived in Javea some 500 years after Javea’s patron saint became popular (San Sebastián) and so in 1967 Jesus Nazareno was bestowed the title of ‘perpetual mayor’.

The Fiestas en Honor a Jesús Nazareno always begin on the third Sunday of Lent (usually mid-to-late April) until May 3.

While the heart of the Jesus Nazareno festivals is the solemn processions of a beloved figure of Jesus through Javea old town streets, you’re most likely to encounter the bull-running events in La Placeta del Convent as well as theatre shows, Passacalle marching bands, firework displays and stunning Cruces de Mayo (May Crosses) flower displays all over town.

When is the Jesus Nazareno festival in Javea?

Third Sunday of Lent until May 3rd.

Where is the Jesus Nazareno festival in Javea?

You can watch the processions of the figure of Jesus Nazareno walking from the Ermita del Calvario church down to the Iglesia de San Bartolomé in the old town and back. Festivities can be witnessed all across Javea, but focused on the old town and port area.

What’s the highlight of the Jesus Nazareno festival in Javea?

The History of the Jesus Nazareno festival in Javea

According to Javea’s official tourism portal – the Jesus Nazareno festivals are the most ‘popular’, the ‘oldest’ and the ones with the most ‘devotion’ of the whole year.

You could easily mistake Jesus Nazareno as the patron saint of Javea – and you wouldn’t be far off.

In 1967, the figure of Jesus Nazareno was declared the ‘mayor in perpetuity’ of Javea.

To understand why Javea residents are so fond of Jesus Nazareno, we will need to cover 250 years from the era of religious brotherhoods, to the arrival of the figure itself by sea and to the outbreaks of cholera and plague which threatened Javea in the 19th century.

The meaning behind the name ‘Jesus Nazareno’ refers to the town in Galilee where Jesus Christ spent most of his life: Nazareth.

Religious brotherhoods bearing the name ‘nazarenos’ have been popular throughout Spain since at least the 16th century. Cloaked members of these brotherhoods walk solemnly through town streets as they carry on their shoulders a figure of Jesus Nazareno on feast days – for a figure to be called ‘Jesus Nazareno’, Jesus will always be carrying a cross.

The arrival of Jesus Nazareno in Javea

The figure of Jesus Nazareno arrived in Javea in 1767 (a gift from the Duke of Medinaceli). A year later – in 1768 – the religious Brotherhood of the Holy Cross in Javea began the first festival in honour of the figure during Holy Week.

The brotherhood carried the figure from the Ermita del Calvario which sits atop Javea down to the Iglesia San Bartolomé in the centre of the old town.

These steps have been followed every year (pandemics permitting) for over 250 years.

The festivals in honour of Jesus Nazareno in Javea really began to take off from 1834, the year that Asiatic cholera hit eastern Spain.

Despite outbreaks in 1834, 1854, 1865 and 1884, history records that Javea escaped the monumental death toll seen in surrounding Marina Alta towns. The people of Javea believed it was a divine miracle, attributed to the protection of Jesus Nazareno sitting in the hermitage above the town.

A historical account from Jaime Buigues says that, in 1835, Javea’s residents decorated the old town streets with ‘20 arches of myrtle’ all along the route that Jesus Nazareno would take on his procession back up to the Ermita del Calvario. Once there, a fireworks display ran out across the Gorgos valley.

The same happened again in 1886, this time with ‘375 arches of myrtle, 400 trees, 866 lanterns of all shapes and colours, and not even counting the smaller ones’.

From these accounts alone the status of Jesus Nazareno as ‘perpetual mayor’, the annual floral competitions in the streets and the fireworks all fall into place

(Bull-running has been a feature since at least 1886.)

Note: the actual patron saint of Javea, San Sebastian, similarly rose to popularity as Javea locals sought his protection during plague epidemics in the 14th century.

The Festivals of Jesus Nazareno in Javea

The Fiestas en Honor a Jesús Nazareno take place from the third Sunday of Lent (in mid-to-late April) until May 3rd.

You can find a complete programme at the beginning of April each year. But here’s a brief overview of festivities.

Here’s an overview of what you’ll encounter in the old town of Javea each year from mid-to-late April until May 3rd:

Subida a Jesús Nazareno – May 3rd

On the climactic day of the Jesus Nazareno festivals in Javea, the day’s festivities are typically as follows: 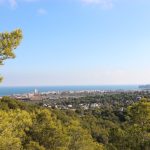 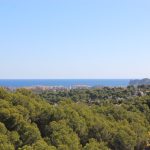 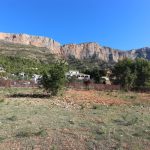