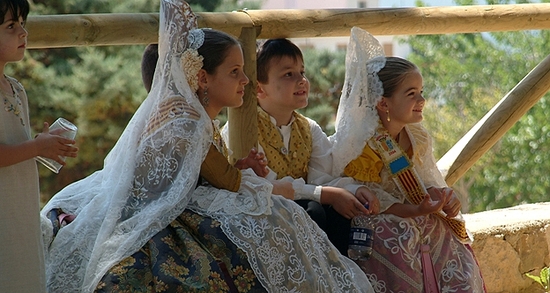 The bonfires of Saint John – known in Valenciano as Les Fogueres de Sant Joan – is by far the most popular festival in Javea.

For 15 days in June, Javea locals take their tables and chairs into the streets as they celebrate the start of summer among fireworks, family and traditional songs they’ve sung their whole lives.

The pyromaniac pinnacle of Les Fogueres de Sant Joan is the Nits dels Focs (Night of the Fires) where Javea residents jump over bonfires, get soaked by firefighters and are chased through the old town streets by firecracker-wielding ‘demons’.

The bonfires of Saint John are undoubtedly a Javea festival you won’t forget.

Read on to find out more.

When are Les Fogueres de Sant Joan in Javea?

The bonfires of Saint John festival in Javea typically take place for 15 days leading up to the feast day of Saint John the Baptists – on 24th June.

Where are Les Fogueres de Sant Joan in Javea?

The main events take place in the old town of Javea – and in particular the Plaza de la Constitución – but there will be parades in the port area of Javea and the Arenal as well.

What are the highlights of the Les Fogueres de Sant Joan in Javea?

The Festival of Les Fogueres de Sant Joan in Javea

The Bonfires of Saint John are called the Hogueras de San Juan in Castellano Spanish and Les Fogueres de Sant Joan in Valenciano.

Among all religious festivals in Javea, the Fogueres is the one with most conspicuous pagan roots – due to both the dramatic bonfires and the date surrounding the summer solstice.

Despite the ancient tradition, Javea’s version of the Fogueres de Sant Joan dates back to 1950 when locals decided to put a local twist on Valencia’s iconic Fallas festival. From Valencia come the traditional fallero attire, the spectacular ninots sculptures and the traditional songs in Valenciano.

Due to widespread popularity, by 1951 the following events featured in the festival:

By 1984, all local school children who turned 18 (and were due to leave school that summer) became the protagonists of the Les Fogueres de Sant Joan festivals in Javea. These school leavers are called the Quintà in Valenciano.

They have the privilege of a cena de gala (gala dinner event) where they parade in pairs before the Queen of the festival appears.

A few days later, this Reina will start off the festivals by shouting from the balcony of the Javea Town Hall to invite all neighbours and visitors in Javea to come out and enjoy the festival of Saint John.

During the Fogueres de Sant Joan festivities themselves, the school leavers appear on stages at numerous times for celebrations, they parade through Javea’s town streets, and are the first line of dancers around the bonfire of old furniture on the Nits dels Focs.

While the Quintos and Quintas take a major role, behind the scenes the network of Penyes (traditional associations who typically own or rent a building in Javea old town) and the Comisión de Fiestas de Fogueres de Sant Joan organise the fireworks, the music events, the programmes and drinks.

The Night of the Fires is the climax of the San Juan fiestas.

The Penya L’escaldà is the association in charge of the fire and fury of 23rd of June, which starts the ignition of six bonfires along the streets of Javea’s old town.

If you’re near the Policía Local station at 11pm on 23rd June, you’ll be absorbed in the huge crowd who march with drums as they jump over each bonfire with crowns of myrtle flowers.

It is typical for the quintos dancing around this bonfire to shout ¡este bombero no tiene manguera! (here’s a fireman who has no hose!) and subsequently get a jet of water that soaks everyone around.

(Note: it is also customary for Javea locals to also dip their toes in the sea at midnight on the eve of Saint John’s day, and throw their crown of myrtle flowers into the sea after the seventh wave while asking for a wish.)

But the Nit dels Focs is not over yet.

Festival goers will now gather on the Avenida de Valencia as masked demonis (‘demons’) appear from nowhere and begin to spray the crowd with firecrackers. Another parade begins accompanied with drums, fireworks rattling overhead, underneath and to all sides until arriving at the Plaza de la Constitución.

Many of the demons will be riding a bicycle with a metal bull’s head on the front and firecrackers spurting from its horns.

At the Plaza de la Constitución prepare for another huge fireworks display with beating drums and festival goers shouting ¡No ni han cohets! (I can’t see any fireworks!) before getting a face full of sparks.

Finally, on 24th June, the huge sculpture that’s been sitting in the Plaza de la Constitución will be burnt. This work of art is full of colour and made from polyurethane, as its numerous figures satirise events that have happened in Javea over the past year.