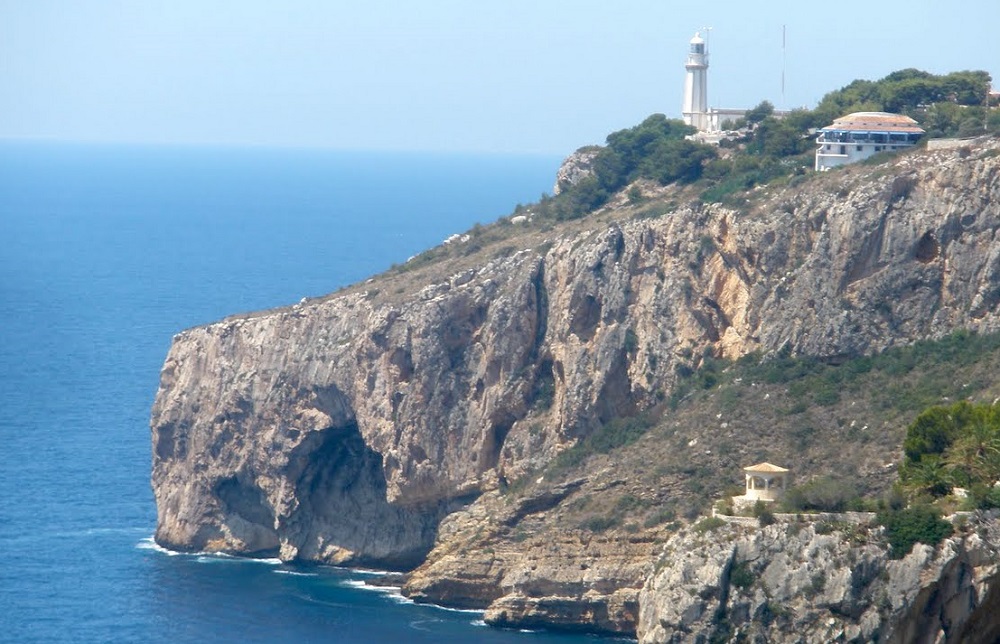 Cabo de la Nao or ‘Cape of the Ship’, is the easternmost cape between Alicante and Valencia, boasting one of the most beautiful views of Javea. A ‘cape’, as defined by Google ‘is a high point of land that extends into a river, lake or ocean.’, in this case the latter, Cabo de la Nao’s rugged limestone cliffs jut out into the Mediterranean as the closest point of the municipality to Ibiza, the clubbing capital of Europe! Although the island is almost 90km away, it can still quite easily be seen on a clear day!

There are many caves and inlets along the base of the Cape, such as ‘Cova dels Orguens’, a vast cave, definitely worthy of exploration, making it a popular spot for scuba diving and kayaking excursions. Furthermore, the remnants of old hand crafted ladders, made by refugees and smugglers may still be seen propped against the rocky cliffs!

Additionally, Cabo de la Nao also has its own majestic, 20m tall, white lighthouse. Built in 1928 and standing 122m above sea level, the light produced can be seen for up to 23 miles and is considered to be an iconic spot in Javea. There are two restaurants in close proximity to the lighthouse for when you get hungry, but in truth… the real gem of Cabo de la Nao is the view! Go and see for yourself!

How to get to Cabo de la Nao?

Cabo de la Nao is the most easterly point of Javea, approximately 7.5km from the Arenal beach. To get there from the Blanca Cars office one must…

Costa Nova area in Javea is mostly flat with good road infrastructure and smaller scale plots starting around 700m² which is ideal for keen gardeners who don’t want major up-keep. Most properties were originally built on one level but over the years, many have been extended by adding upper levels, so there’s a mixed selection. Costa Nova offers a few great workers’ bar-restaurants; ideal for home cooked menu’s of the day. View properties for sale in Costa Nova in Javea