Weather in Javea in January

Also read: Weather and temperatures in Javea all year around

Climate data in Javea in January

The weather in Javea in winter is very mild compared to Northern Europe. Most winter days in Javea are clear and sunny with little rainfall. Temperatures are unpredictable and can vary greatly in winter. One day it may be over 20 degrees Celsius and you will be walking around in a t-shirt, another day it may be 6 degrees Celsius and you will feel very cold.

Even in winter, there is not much in Javea except when Javea experiences a ‘Gota Fria‘ – this happens when the temperature suddenly drops which results in incredibly heavy rain and flooding. Gota Fria also creates big waves and high tides that often destroy the beaches of Javea.

January is winter time in Javea

Glossary for weather in Javea in January

Minimum Temperature = Average lowest temperature in the years 2003-2012. The temperature can sometimes be higher or lower.

Humidity = Average humidity. Depending on the actual wind and sun amount, the value may be higher or lower.

Yes, foreigners can buy property in Javea – here’s how 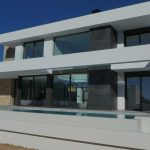 Commercial in Javea Spain For Sale

Yes, foreigners can buy property in Javea – here’s how