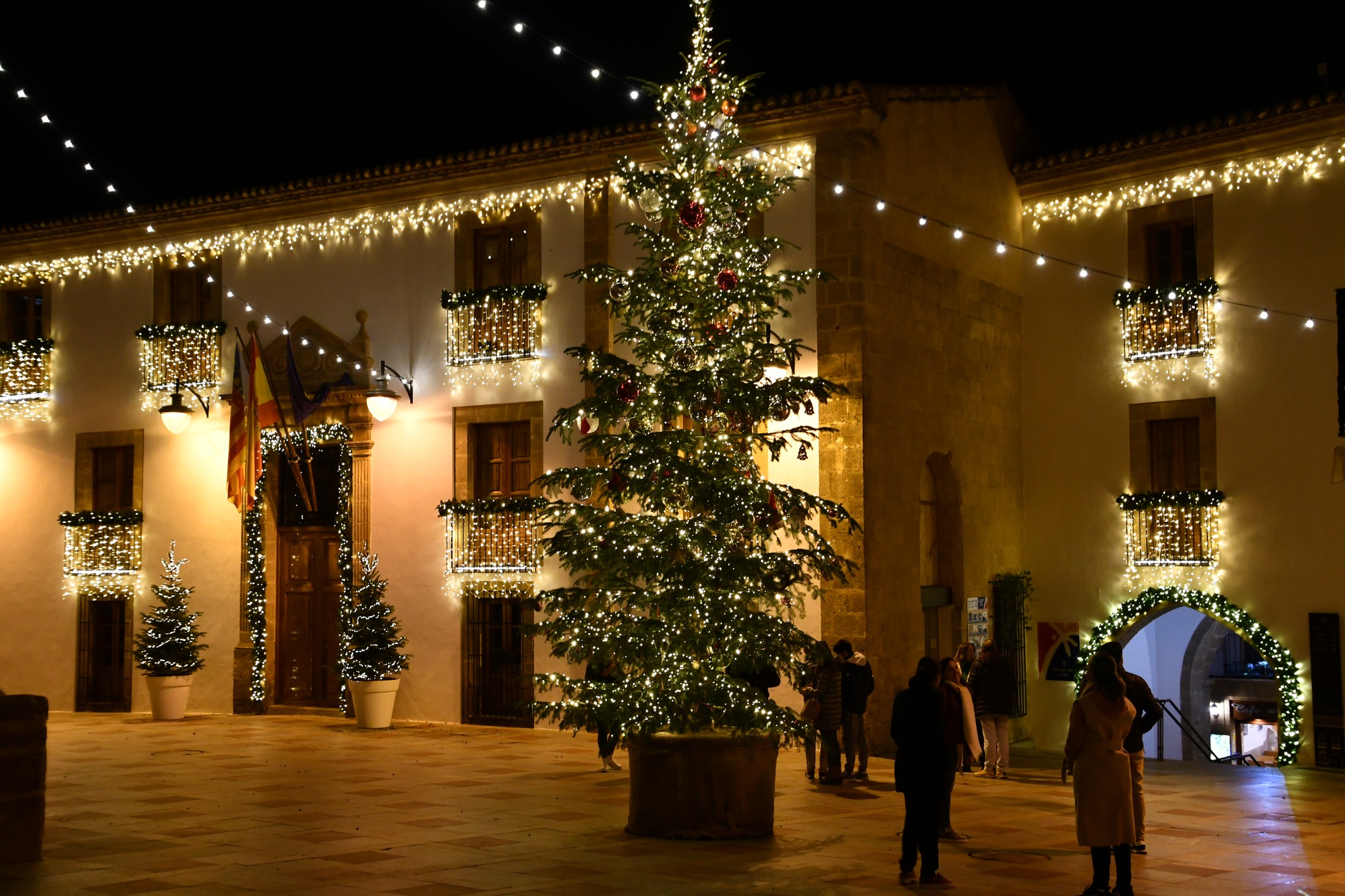 Here’s a few things that will shock you about Christmas in Javea:

When is the Christmas period in Javea?

Christmas fever begins on 8th of December in Javea. The date is a national holiday in Spain celebrating the Immaculate Conception of the Virgin Mary, and it’s when the Christmas lights are switched on and Christmas trees go up around Javea.

Where are the Christmas lights & Christmas trees in Javea?

Three Christmas trees go up in Javea every 8th of December: one in the Plaça de la Iglesia in the old town of Javea, one on the Joaquin Sorolla Passage in the port area and one on the David Ferrer Passage in the Arenal.

Christmas lights can be seen above the streets in each of these areas, while the main roundabouts always get a Christmas makeover.

What’s the highlight of Christmas in Javea?

Ask any child in Javea, and they’ll tell you the 6th of January. This is the day when children receive their Christmas presents from the Three Kings.

Ask any adolescent, and they’ll probably tell you it’s the night out on Christmas Eve.

Ask anyone else, and you’ll get a response about the great food, the pretty lights, the cozy artisan markets, time with the family or the funny traditions.

What do people eat at Christmas in Javea?

Every region in Spain has its own traditional Christmas dish.

While the Valencian region is famous for paella, it’s know what families in Javea will be eating at Christmas. Most likely they’ll be tucking into a plate of ‘puchero valenciano’ aka ‘putxero’.

This typical Valencian dish is a broth made from bones, meat and vegetables (especially chickpeas, carrots and turnips). The ingredients are removed from the broth after hours in a pressure cooker, and rice is cooked in the broth. All are then served together: rice soup, cold meat and vegetables.

The finishing touch is a meatball called ‘pilota’ or ‘pelota’. It’s usually a large round ball, made of minced pork meat, pine nuts, parsley, bread, and so on.

The best way to enjoy Christmas in Javea is to do what the locals do. If this is all new to you, then enjoy these five unusual traditions to look out for in Javea:

Ticket sales for the Lotería de Navidad go on sale in July each year in Spain. In Javea, you’ll see most bars and cafés begin advertising ticket sales well before December. The tickets actually cost €200, but most people will split one ticket into 10 décimos for €20 each.

Since so many people in a particular area have the same number, when the winning number (El Gordo) is chosen on 22nd of December each year it usually means a block party in a specific town in Spain.

In 2020, the bookmaker’s in the port area of Javea just one décimo of the winning number and brought someone in Javea a cool €400,000.

Spain is crazy about nativity scenes. Literally – in 2021, Alicante entered the Guinness Book of World Records for the tallest ever nativity scene (featuring a 20m-high Joseph, Mary and baby Jesus.)

Wandering through the old town of Javea, you’ll see many handmade nativity scenes on display in the front windows of houses. It’s common for Christmas markets to sell figures and decorations for nativity scenes.

Every year, the Centre d’Arts Lambert in the old town of Javea also displays a large nativity scene for all to enjoy over the Christmas period. You’ll often see people scrutinising the nativity scene for a long time – they’re not drunk, they’re just looking for the ‘crapper’!

Since the early 18th century it’s been a tradition to hide a caganer or ‘crapper’ in a nativity scene – that is, the figure of a man crouched with his trousers down and backside exposed.

It’s said to be a symbol of fertility, luck and prosperity.

Spanish April Fools’ Day is actually in December. Every 28th of December to be precise.

The day is called the ‘the day of the innocents’ and remembers the order of King Herod to kill all new-born babies in the attempt to murder the infant Christ. But in practice, it’s a day for practical jokes.

In Javea it’s common for friends and family to buy joke items at markets (think whoopie cushions) but the jokes can become quite sophisticated. The local news outlet Javea Amigos has been known to publish fake stories on social media – like the time they announced the town hall was bringing in extra parking charges for foreign vehicles!

There’s a tradition in Javea to celebrate New Year’s Eve at midday on December 31st in the old town of Javea.

If you know nothing about Spanish New Year’s Eve traditions, here’s what you’ll find:

The only difference during the noon-time New Year’s Eve is that people in Javea eat orange segments rather than grapes. There’s also music and dancing and young children playing.

Closer to midnight, it’s customary for all Spanish people to switch on the television for a live annual broadcast from outside the Real Casa de Correos in Madrid. Celebrity hosts herald in the New Year as millions across Spain collectively eat the ‘12 grapes of luck’ with their families.

On New Year’s Day itself, there’s always an annual dip in the sea at 1pm at the Arenal beachfront in Javea and organised by the Lancashire Bruja pub/ restaurant with a collection box for local charities.

Children in Javea receive their presents on 6th January, when the Three Kings are in town.

The Three Kings arrive by boat on 5th of January, and parade through the streets while throwing boiled sweets to children. It’s customary for parents to pass up their new-born children to receive a kiss from either Melchior, Gaspar or Balthasar, often riding on horseback.

There’s a nativity scene at a stage set up in the port of Javea (followed by fireworks) and at around 7pm the Reyes Magos walk up to the old town for another nativity scene in the Placeta del Convent.

You’ll notice red post boxes pop up across Javea from 26th of December onwards. These are where children leave cards with their present wishlist.

Children are supposed to leave a pair of polished shoes by the window on the eve of 6th of January – but many parents give in, so you’ll see children riding around on their new scooters or bicycles on 5th of January too.
Read more about The Three Kings festival in Javea here.