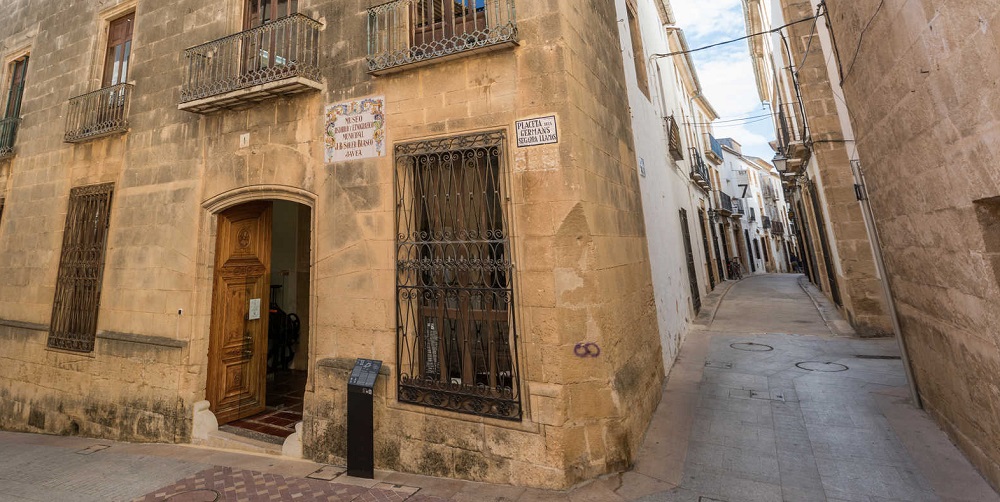 The Soler Blasco Archaeological and Ethnographic Museum also known as the Soler Blasco Museum is located in ‘The Palace House of Antonio Bañuls’ and is one of the most significant buildings in the Historic Center’s architectural district. The Soler Blasco exhibitions feature an unchanging collection of historical objects and artifacts relating to Jáveas past.

The building was originally built and occupied by Antoni Banyals in the early 1600s, who at the time was known to be an important figure due to his working role of butler to the then King, Felipe III. Just over 300 years after Banyals death in 1662, the building’s purpose was converted into the Museum that it is today. This was due to the collection of ethnographic and historical materials by a group of young people, led by Juan Bautista Soler Blasco and J. Celda, prompting the creation of the Museum in 1969.

A few years later, this collection was transferred to the Chapel of Santa Ana, where it was placed on display as a small exhibition. In 1975, thanks to the then Mayor, Soler Blasco, the city council managed to acquire ‘The Palace House of Antonio Bañuls’, which since 1977 has held the artifacts on display as a permanent exhibition.

The Museum was then named after Juan Bautista in recognition of his efforts in its formation. Since 1985 the Museum has had a municipal archaeologist who manages and provides technical advice.

As well as the historic exhibitions the Museum also offers other services such as a library, a small restoration laboratory and an archeology and ethnography warehouse. Utilizing these, the Museum carries out archaeological excavations and other duties of prospecting, cataloging and protecting the historical and ethnographic heritage of Jávea. Given the importance of its collections and the ongoing work towards maintaining and discovering new historical evidence, the Museum has its own place within the ‘Culture section’. In 2008 the Museum was expanded, adding a new building, greatly improving the facilities and allowing an additional 2 new exhibition rooms.

The first floor of the Museum displays a 32 piece collection of work imparted by the painter Juan Bautista Segarra Llamas, as well a collection of his personal belongings. The upper floor is devoted exclusively to underwater archeology, with an assortment of artifacts discovered from the surrounding coastline, including a vast lead anchor dating back to Roman times, which has now been restored. All in all, this Museum is a must visit when exploring the Historic Centre of Jávea!

How to get to The Soler Blasco Archaeological and Ethnographic Museum?

San Bartolomé Church is located just under 4km NorthWest of the Arenal Beach. To get there from the Blanca Cars office one must…

The road will bear left becoming ‘C. Trinquete’ and then left once again becoming ‘Calle Rda. Nte’. You should then take your 1st left followed by your second right, at which point any parking space available would be suitable. Walk around the Church of San Bartolomé and towards the tourist information office. Do not walk down the steps but instead, follow the alleyway to your right for 60m and you will have arrived at the Museum!

The urbanisations in the Montgó area in Jávea are characterized by being very spacious and with very good communication. We can find houses for sale in the Montgó area in Jávea at very competitive prices and it is an ideal area to live all year round for people who like nature, relaxation, tranquility and still want to be close to the city center.

One of the many reasons why many want to live in the Montgó area in Jávea is because of its orientation. Almost all the Montgó parcels are oriented to the South and to a lesser extent to the Southwest. Location is very important for people who decide to live in the Montgó area in Jávea. The winds from the South are warmer and the situation of the mountain with the sea allows the houses to enjoy the sun much more. View properties for sale in Montgo in Javea